MAS 2008: Thesis time
Inside MAS
Life after the MAS
Four Million for the HCA
Spring Academy 2008

Welcome to the Heidelberg Center for American Studies’ MAS newsletter! This edition covers some exciting summertime highlights like the MAS Thesis Presentation Workshop, the HCA Ph.D. Colloquium and last but not least Curt Engelhorn’s generous announcement to support the HCA with an annual grant of 400.000 EUR over the next ten years.

These days the summer weather invites Heidelberg’s students to spend their time on the Neckarwiese instead of studying, while at night the matches of the UEFA EURO 2008 lure soccer fans to pubs or public viewing places in the Marstallhof or University Square. Despite these distractions, the MAS students stay on track and continue working on their theses, which encompass promising projects reflecting the interdisciplinary approach of the program.

As every year, there is a wide range of topics. Recent foreign policy is, of course, always of great interest. Indeed, no less than two projects will analyze ’s policy; other projects deal with policy regarding Chinese human rights issues or the challenges faces in dealing with Islam. More historically oriented projects concentrate, for example, on the from 1953 to 1969 or the African American Muslim experience from 1625 to 2007. Other students are interested in mapping certain strands of American social and political thought, analyzing Chinese political support in the , Black feminism in Internet blogs or the twentieth-century homosexual rights movement in the . The latter is the first MAS thesis examining a gay/lesbian studies subject. Naturally there are also works located mainly in the areas of literary and cultural studies. There will be a study exploring Romance Novels, while another deals with in the African American popular imagination. Two further theses will be about Americanization and Europeanization as two forms of cultural globalization and the contribution of the Gülen Civil Society Movement to intercultural dialog. Other projects investigate the transformation of the public image of the First Lady throughout the second half of the twentieth century and the translation of popular views of into a brand of leisure tourism. Finally, religion is the source of interest in a project that investigates the contribution of Evangelicals to the environmental movement. This year’s theses once again reflect the vitality of the field and the wide range of possibilities for academic inquiry that American Studies have to offer.

Elizabeth Borgwardt, associate professor of History and Law at Washington University in St. Louis, joins the HCA as Fulbright Visiting Professor for the Summer Semester 2008. Prof. Borgwardt is teaching an Interdisciplinary Seminar on "Historical Perspectives on Human Rights and Globalization" and is supervising three theses of MAS students. 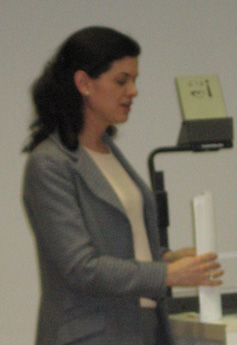 An honors graduate of , Professor Borgwardt also holds a doctorate in History from and a Masters in International Relations from . Her BA is in History, also from . A former practicing lawyer and law professor, Professor Borgwardt is now a historian specializing in the study of human rights and international institutions, as well as the history of public international and humanitarian law. Her most recent book, "A New Deal for the World: 's Vision for Human Rights," has received several prestigious book awards and was nominated for a Pulitzer Prize.

Liz Borgwardt comments on her experience at so far, "It was really an honor to be selected by the HCA and to be part of such an exciting interdisciplinary team of young and experienced scholars working together. It is also personally quite touching to me to be a part of such a dynamic, forward-looking, and "globalized" piece of an old and established university, which is actively struggling to overcome a most unfortunate wartime history in a refreshingly progressive and open spirit." She adds that "offering one of the workshops at the annual and participating as a chair of one of the panels at the Oberflockenbach Retreat has really given me a feeling for the exciting work young people from all over the world are undertaking in the field of American Studies, broadly construed. I hope my own background and research interests may help me to link social and cultural approaches to American Studies with political and legal ones, in a manner that might benefit these new projects in some small way."

Life after the MAS: Ph.D. Colloquium in Oberflockenbach

Former and current MAS students Anja Milde, Cristina Mustea and Jiawei Mao presented their theses during the Ph.D. colloquium in Oberflockenbach, June 6 and 7.

Blessed with sunshine and a mild summer breeze, participants of the HCA Ph.D. program in American Studies, together with teachers and students, convened on June 6 and 7 for the fifth annual Ph.D. colloquium at the Curt-Engelhorn-Seminarzentrum in Oberflockenbach. The Seminarzentrum, formerly the home of the Italian-born chansonnier Caterina Valente and acquired by our benefactor Curt Engelhorn, continues to serve as a favorite retreat for numerous study groups affiliated with the University of Heidelberg, among them the HCA Ph.D. program. As in previous years, the colloquium listened to exciting talks, witnessed stimulating discussions and brought together a wide range of speakers and topics, thereby living up to the intercultural and interdisciplinary mission of our institute.

The first panel Literary & Intellectual Interventions featured two Ph.D. candidates from the English Department, Tamara Treichel and Tobias Endler. They were followed by two HCA Ph.D. students, Cristina Mustea and Karsten Senkbeil, who presented their ongoing research in the field of Popular Culture & the Media. For the next panel which focused on Civil Rights at Home and Abroad, the floor was yielded to two young historians associated with the HCA, Anja Milde and Alexander Vazansky. Florian Pressler and Jiawei Mao, historians also, concluded the event with talks exploring different aspects of U.S. Foreign Economic Policy.

After the final panel, the participants left Oberflockenbach thoroughly satisfied. Apart from giving informed advice to panelists of diverse disciplinary backgrounds, the colloquium members managed to create a supportive and intellectually engaging atmosphere worthy of a true community of scholars.

Four Million for the Next Decade

Curt Engelhorn supports American Studies in Heidelberg with 400,000 EUR annually for the next ten years.

The generous sponsors of American Studies at the of , honorary senator Curt Engelhorn, and his wife Heidemarie, have decided to put their support for the for American Studies (HCA) on a solid, long-term financial footing. They will provide the HCA with 400,000 EUR annually for the next ten years with a prospect of extending that period even further. This guarantees the future of the HCA as a unique public-private partnership in the humanities and social sciences in .

The fifth was held April 21–25. This time it welcomed twenty young scholars from Europe and the who came to to present their Ph.D. projects and swap ideas with their peers.

Torsten Kathke arrived in from , where he is working on his Ph.D. thesis “Wires That Bind: Democracy and Nationhood on the American Periphery, 1877-1914.” Here are some impressions he took back with him to the Bavarian capital: “The is that rare find. It's a meticulously planned and run event, but never impersonal. The schedule is set up with people in mind, not checkboxes or to-do lists. Still, it's a challenge – it might find you lost or confused at any given moment, but then you won't be the only one. If all you wanted was a different take you'll instead get a dozen. The very international, very diverse crowd you'll meet will lead you to question your obvious truths and tried-and-true thoughts, and you'll be glad you had that opportunity. How anyone could complete a Ph.D. project without such feedback I will never know. That particular kind of blissful ignorance deserves the loudest of cheers and a giant, all-caps THANK YOU!”

It might also warrant mentioning that 11 alumni from previous conferences returned to as participants in the Annual Convention of the German Association for American Studies, held here May 15–18, on which we reported in the last MAS Newsletter.

This is a cost-free, non-profit service. No addresses or other information will be forwarded to third parties.