MAS 2006: Summer Time - Thesis Time!
MAS 2007: The New Students are Coming
MAS 2008: Ready for the Heidelberg Experience ?
Inside MAS: A Maldivian in Heidelberg
Future News of the HCA

we would like to share the summerly international and creative atmosphere of the HCA with you. Therefore the title of this edition of our MAS quarterly newsletter: The Heat is on. We hope you find the subject interesting. We appreciate your feedback.

Please feel free to share this information with anyone interested in American Studies by clicking on this recommendation link.

Being a student of the MAS program at University of Heidelberg might at first glance not seem like the most enviable task these days. With the distractions of the FIFA World Cup in June and the ongoing heat wave it is hard for the students to stay on track and continue working on their theses. But despite these obstacles they are engaged in promising projects that reflect the interdisciplinary approach of the program…

As last year, there is a wide range of topics. Recent U.S. foreign policy is, of course always of great interest. One project will analyze the current administration´s relations with the U.N., another project deals with the Clinton administration´s views on military intervention. There are also more historical projects analyzing, for example, President Wilson´s role in the Mexican revolution or Japanese internment during World War II. Other students are interested in mapping certain strands of American social and political thought analyzing writers such as Walter Lippman or Robert Penn Warren. Media and film have become an area of great interest this year. One project analyzes and compares public and private broadcasting in the U.S., while another project deals with religious programming on the American Forces Network. A third thesis will look at the contribution that Jewish German immigrant Carl Laemmle, founder of Universal Studios, made to the emergence of Hollywood. Naturally there also works located mainly in the areas of literary and cultural studies. There will be two studies exploring cultural issues in Mark Twain´s work. Another thesis will compare the poetry of Langston Hughes with the lyrics of rapper Nasir Jones. The intersections between historical writing and the historical novel are the focus of a project analyzing Don DeLillo´s Libra. Finally, religion in America is once again a source of interest in a project that aims to tie Jim Jones and the People´s Temple into American religious thought. Overall this year´s MAS students are demonstrating the vitality and the wide range of possibilities for academic inquiry that American studies has to offer.

MAS 2007: The New Students are Coming

In October 2006 our third MAS class will engage in the one-year adventure to combine inside knowledge with an outside perspective. Coming from Bulgaria, China, Georgia, Germany, Japan, Kazakhstan, Kyrgyz Republic, Romania, Russia, Tanzania, Turkmenistan, Ukraine, Uzbekistan und the U.S., the students will spend a unique year in the heart of Germany´s South-West, with cities like Paris, Vienna, Berlin and Prague only a train ride away… 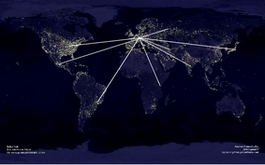 After graduating from the University of Heidelberg in American Literature, Christian Maul decided stay in Heidelberg for the MAS. To him the unique feature of the MAS is the international community of students at the HCA that provides a wide range of points of views on the U.S. Other students like Julia Novacescu (previous university: University of Bucharest) seek to enrich their knowledge about the United States of America. To Toshiko Yamada (previous university: Hitotsubashi University) Germany feels like her second home country. US-Americans like Robert Lee (previous university: Columbia University) bring inside knowledge on the USA in the MAS and gain their first experience on Old European soil. He seeks international experience along with first class multidisciplinary teaching.

MAS 2008: Ready for the Heidelberg Experience ?

If you are interested in a multidisciplinary, one-year program in English at Germany´s oldest university – the MAS 2008 is the program to apply for! 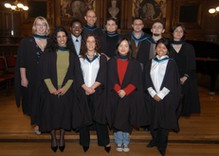 The MAS is unique. The small number of students admitted to the program each year guarantees an excellent student-teacher ratio. Yuyun Chen (MAS 2005) felt that the uniqueness of the program was in the close cooperation among the various departments of the University of Heidelberg, the intensive course schedule, the combination of German and American teaching styles, and the multi-cultural environment. Of our MAS-Alumni 40 per cent are now in graduate programs at the University of Heidelberg or international universities where they were awarded scholarships. The remaining 60 per cent either went back into their jobs or gained employment in administration, banking, NGOs, public service and international business. If you are interestes in the program, please visit www.mas.uni-hd.de or contact us directly via email.

Inside MAS: A Maldivian in Heidelberg

Despite most likely being the only Maldivian in Heidelberg at the moment, I did not regret this choice for a minute. Born on a tiny island, I guess, it is natural for me to like small welcoming towns like this. Heidelberg must be quite an unusual destination for a Maldivian, lacking an university of its own, most of the Maldivian students go abroad mainly to English speaking countries to study, but the combination of a different language, culture and experience was especially tempting for me. And I wasn´t disappointed at all. Without a single Maldivian around I had the chance to really mix into the German culture and the international atmosphere of the university, a very different experience than I would have had elsewhere. The difference between the two countries is not that great as one might imagine; after all Maldives forms the southernmost spot of the indo-arian language group, which even German is a northern branch of…

Though it would be a lie if I said I did not miss the white sandy beaches, the blue lagoons, the warm weather and a big family around, I found lots of things to compensate for that. Like the Maldives, Heidelberg has water – in the shape of the Neckar river and some lakes in the region – to offer, to swim in the summer, which create a very relaxed environment. Though in Heidelberg, like in the capital of Maldives, it is very easy to reach all the places in a short time. The distances I cover here on a daily basis are longer than my whole hometown spreads over. Walking around in the streets of the old town and near the river, one always has the feeling to be blessed by having the chance to live in such an old and historic town following the steps of so many important writers and philosophers from all over the world, who lived in Heidelberg. One does not get this tranquil feeling anywhere else. It was fascinating to discover how a place can create such unique moods.

The most eye-catching difference between Heidelberg and the Maldives is the mountains, as the highest point in the Maldives is only two metres above sea level. I enjoy climbing the Koenigsstuhl, one of the most popular places in Heidelberg, which overlooks the town of Heidelberg. In winter, it transforms into a snow-capped mountain and automatically becomes the most attractive place to visit in Heidelberg. The biggest contrast however for sure is the weather. While at home, every day is about the same all over the year with comfortable 28-30 degree celsius, in Heidelberg you never know what to expect the next day. It might be beautifully snowy and cold or burning hot in the summer. Nevertheless, it is the summer that brings Heidelberg to life. The long days combined with evening barbeques and swimming in the nearby lakes make every day a day to be treasured.

Needless to say, Heidelberg has the correct blend of everything. It is this blend coupled with the student atmosphere and the wonderful setting that makes this place so ideal and special for a student. It really makes a learner’s dream come true.

Further News of the HCA: Apply for the HCA Spring Academy 2007!

The next HCA Spring Academy is going to take place at the Internationale Wissenschafsforum from April 16 to 20, 2007. The HCA Spring Academy aims at establishing an international network for PhD students specializing in the fields of American History, Politics, Law, Economics, Sociology, Literature, and Cultural Studies particularly aspiring to facilitate the insights that can be generated by cross-disciplinary dialogue. The online application starts from August 1, 2006.


Here you can find further news.