Inside MAS
MAS 2006: The Graduation of the Class of 2006
MAS 2007: Any questions? The new MAS students after the orientation week
MAS 2008: Apply now!
MAS 2008: The Scholarships for the Class of 2008!
Enemy Mine - An HCA Workshop that Turned into a Publication
The HCA Spring Academy 2008: American History, Culture, and Politics
U.S. Ambassador Visited the HCA

Chisato Oka from Yokohama in Japan reports, how she got in contact with the MAS program in January 2004. Now, just one and a half year later, she finished her M.A. thesis entitled Stereotype, Public Opinion, and Presidential Order: Why FDR Signed the Executive Order 9066. 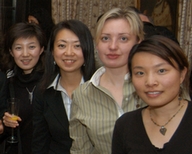 A poster advertising the MAS 2006 at the University of Freiburg gave me a chance to take up this international program in Heidelberg and to learn more about the U.S.A. from various perspectives. After graduating from Temple University in Philadelphia with a B.A. in Broadcasting I went back to Japan and joined MTV Japan in Tokyo as a production assistant. My goal for the future was to be involved in the broadcasting industry and to produce U.S.-Japanese joint programs. The more I worked with the station, however, the more I became interested in theoretical questions of society and mass media, and desired to have the necessary knowledge and skills to better prepare for my ultimate career goal: broadcasting. While I was visiting a friend in Freiburg, I learned about the MAS program. The program seemed ideal to me because it focuses on research on American culture with classes in geography, history, law, literature, political science and religious studies. I also really liked the international atmosphere when I saw Heidelberg. This is, why I decided to leave MTV Japan behind me and to join the MAS 2006.
Since the program was international, I had a great opportunity to learn how the other students saw an issue from a different perspective. Due to our different cultural backgrounds, every class discussion broadened our view points and gave us a better chance to understand world issues. Moreover we had classes not only with the MAS students but also with German students from various departments. After completing the MAS 2006, I realized that my analytical skills were much improved and I am on my way to reach my ultimate career goal.

On October 27, 2006, the HCA will graduate its second class, the Class of 2006. Simultaneously, we will welcome the Class of 2007 to our program in Heidelberg. We cordially invite you to celebrate the achievements of our students at 6:00 p.m. in the Alte Aula of the University of Heidelberg, Grabengasse 1, 69117 Heidelberg. 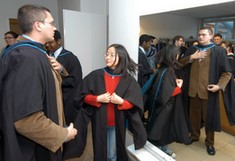 Last October the HCA reunited town and gown and reintroduced academic dresses after an absence of several decades. On that occasion the Rector of the University of Heidelberg, Prof. Peter Hommelhoff, praised the MAS program as setting an example with its interdisciplinary approach as well as with the internationality of its students. Parents and friends came from as far away as Hong Kong, Albania, and the United States of America to join our graduates on their most important day.
This year’s graduation will start with addresses by representatives of the German Foreign Office, the U.S. Consulate General in Frankfurt, and of the state governemnt of Baden-Württemberg. The keynote speaker will be Anne Applebaum, columnist and member of the editorial board of the Washington Post and currently George H. W. Bush/Axel Springer Fellow at the American Academy in Berlin. Her speech is entitled Democratization in 1956 and in 2006 – Has American Foreign Policy Changed?


MAS 2007: Any questions? The new MAS students after the orientation week

Where is the lecture hall? How do I get to my next class? How does the cafeteria system work? Where should I go to open a bank account? These and many more questions plague the new students before their arrival. Don’t give up – there is an answer to every question during the orientation week. 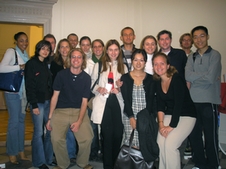 The new MAS students of the Class of 2007 arrived on October 4, one day after the German national holiday. The orientation week for the new students began one day later on October 5. During this week arrivals are introduced to the university’s libraries, departments, and institutions. Each professor has the chance to introduce his lecture course, and the tutors present their tutorials.
And of course, the group is guided through Heidelberg’s historic city center. This year’s student Natalia Obelets from Russia is amazed, how beautiful the city of Heidelberg is. Seth Tinkham (USA) reports: I enjoyed having the opportunity to finally meet my classmates and to be able to spend some time discovering the city of Heidelberg before classes begin. After the orientation week was over, he stated: I think we are all finally ready to begin next week.
If you are interested in further information, please visit the webpage of the Class of 2007. Here you can download a larger version of the group picture (3,3 MB).

Curious to join the Heidelberg Experience? Interested in American Studies? You would like to study a year abroad? Then apply for the MAS program at Germany’s oldest university! The deadline for your application is March 31, 2007…

The Master of Arts in American Studies (MAS) is a one-year, exclusive interdisciplinary program taught in English and aimed at qualified graduate students from around the world. The MAS offers inside knowledge with an outside perspective.
Participants are expected to bring to the program an outstanding academic record as well as work experience and demonstrable social commitment. The MAS provides training in academic and practical skills tailored to meet the needs of future leaders in a transatlantic and global environment.
The University of Heidelberg offers unique conditions for the work of the HCA: an outstanding academic tradition, a sterling international reputation, attractive location in the historic center of one of Germany’s most beautiful and welcoming cities, and a strong record in the study of the United States.
To find out more about the Master of Arts in American Studies, please see here. Nevertheless, if you have any further question, don’t hesitate to contact us on this email-address: mas@uni-hd.de. We will be glad to answer all your questions.
Finally, here you can download the current MAS brochure as a pdf (ca. 850 KB). 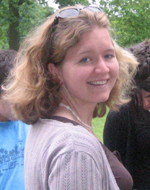 The deadline for the scholarship applications is also March 31, 2007. You will find further information how to apply for the scholarships on this webpage.
In the MAS 2007, the Director’s Fellowship was awarded to Heather Debby (USA), who was the best overall applicant to the program. The Wild Scholarship for a student from Eastern Europe was given to Oleksandr Martynenko (Ukraine). Oleksandr learnt of the MAS when he was in Vienna doing an internship at the International Helsinki Federation for Human Rights (IHF). At the Heidelberg Center for American Studies he wants to continue his education in International Relations. Bobby Lee (USA) received the Wild Scholarship for a student from North America. Originally from New York, Bobby decided to cross the Atlantic to gain international experience, explore German culture and learn the language. The Wild Scholarship for the best international student went to Eteri Churadze (Georgia). Eteri received her MA degree in English Language and Literature from the University of Tblisi.


Further News from the HCA

Enemy Mine – An HCA Workshop that Turned into a Publication

In November 2004, the HCA hosted the workshop “Enemy Mine. The difficult relationship between the GDR and the United States of America, 1949-1989.” Now a generous grant from the “Stiftung Aufarbeitung” allowed the two conveners, Uta A. Balbier and Christiane Rösch, to publish a collection of papers from this conference in their book titled Umworbener Klassenfeind. Das Verhältnis der DDR zu den USA.

This publication explores the relations between the U.S. and the German Democratic Republic between 1949 and 1989.First, it tackles the official anti-Americanism propagated by the GDR government to distance itself from the capitalist western hemisphere and the American imperialists is analyzed. Secondly, it explores the unofficial networks of intellectuals, scholars, and scientists in the GDR and the U.S. that show that a continuous cultural exchange across the Atlantic never ceased to exist – in contrast to the official attitudes. Finally, the edition focuses on the impact of American trends, styles, and popular culture on East Germany. Further information can be found here.

From April 16 to April 20, 2007, the HCA will host its annual Ph.D. conference, the HCA Spring Academy 2007 on American History, Culture & Politics. Ph.D. students from all academic backgrounds within American Studies are welcome to apply for the Spring Academy and to present their dissertation projects during the conference. The application forms are now online! 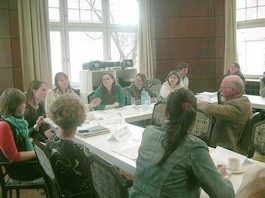 The HCA welcomes applications for its fourth annual Ph.D. conference, the HCA Spring Academy 2007. It will be held from April 16 to April 20, 2007 at the HCA. The HCA Spring Academy on American History, Culture & Politics aims at establishing a growing network of young and aspiring researchers. Every year the HCA invites international Ph.D. students from diverse academic disciplines to Heidelberg to present their dissertation projects in the field of American Studies, including disciplines such as American History, Politics, Law, Economics, Sociology, Literature, Cultural Studies, and Transatlantic Relations. The conference is complemented by workshops, lectures, and an excursion. Here you find further information and the online application.

Earlier this year, the HCA has moved into its new home, the Curt und Heidemarie Engelhorn Palais, a baroque townhouse in Heidelberg’s old city Center. From October 5-8, 2006, the HCA hosted its first major event in its new location: the international conference “State and Market in a Globalized World: Transatlantic Perspectives”. The conference was generously supported by Manfred Lautenschläger, Founder and Chairman of the Board of the MLP AG.

The HCA was delighted to welcome William R. Timken, Jr., U.S. Ambassador to Germany, as keynote speaker to the conference. Ambassador Timken addressed an audience of more than 200 with a lecture on Globalization: How Germans and Americans can Help Shape Global Systems. Here you will find further information.

Distribution: postina.net, Heidelberg
This is a cost-free, non-profit service. No addresses or other information will be forwarded to third parties.