The new MAS: Apply now!
MAS 2008: Graduation of the Class of 2008
Life after the MAS
Topping-out ceremony at the HCA
HCA and the U.S. Presidential Elections
Heidelberg University in New York

Welcome to the Heidelberg Center for American Studies’ MAS newsletter! This edition introduces our restructured MAS program. Conceived as a three instead of a two semester program, the MAS offers its students greater flexibility and more latitude in their academic development. Other topics covered in this issue are the graduation of the MAS Class of 2008, a highlight of the preceding academic year, and the latest expansion of the HCA, student-wise as well as with regard to its spatial extent.

The HCA restructured its MAS program and introduces a new course outline. If you are interested in an exclusive, interdisciplinary American Studies program taught in English for qualified graduate students from around the world, you can apply until March 31, 2009.

Starting in the winter semester 2009/2010 the MAS will be a three semester program, offering students greater flexibility and enhanced possibilities for their academic development. American Studies in the MAS is defined by exemplary and interdisciplinary teaching of cultural knowledge about the United States of America. The program provides training in academic and practical skills tailored to meet the needs of future leaders in a transatlantic and global environment.

A performance-related fast track option allowing students to complete the program in two semesters is available. Students will now earn 90 European Credit Transfer System (ECTS) points during the course of the program, instead of 60. The tuition fee will amount to 2,500 EUR per semester.

You can apply here.

The HCA conferred the degrees to its fourth MAS class consisting of 19 students from 11 countries during a ceremony in the venerable Alte Aula, the traditional auditorium of Heidelberg University. Wearing formal academic attire, the graduates as well as the HCA faculty and staff lend a particularly festive character to the occasion. Introductory addresses were delivered by representatives of Heidelberg University and by Karl Albrecht, Acting Deputy Consul General, U.S. Consulate General in Frankfurt. Prof. Bernhard Eitel, Rector of the University of Heidelberg, congratulated the graduating MAS students, seeing in them an “integral part of the success of the HCA”, which itself “has been a tremendous success” since its establishment in 2002. Prof. Heinz-Dietrich Löwe, Dean of the Faculty of Philosophy, emphasized the increased importance of intercultural skills and understanding in a globalized world, imparted through the MAS curriculum. In her keynote speech entitled “Obama vs. McCain – a historic decision?” Katja Gelinsky, currently working for the Frankfurter Allgemeine Zeitung in Washington, argued that the U.S. presidential elections signified a turning point in North American history, as there would be either an African American president or a female vice president. Prof. Detlef Junker, HCA founding director, awarded the Class of 2008 their diplomas, with Melanie Gish (Germany) winning the HCA Book Prize for the best grade point average. In her valedictorian speech, Melanie stressed the extent to which she and her classmates advanced not only academically but also prospered from their experiences of cultural difference. Following the commencement ceremony, all participants were invited to a reception with food and drink in the HCA Bel Etage celebrating the MAS Class of 2008.

Life after the MAS

Natalia Obelets (MAS Class of 2007) reports on her life after graduation.

Before coming to Heidelberg, I would never ever have thought what kind of experience I would gain there, experience that is really precious both in terms of academic knowledge and personal growth. Being part of the MAS taught me the real meaning of academic life that I was so desperately looking for. Moreover, the international environment we were all placed in, helped me to develop some interpersonal skills that appeared to be really helpful for my future career path.

I just want to express my gratitude to Professor Junker, Dr. Kraft, Alex Vazansky and other members of HCA and encourage other students to take a chance and experience what we'd experienced. The year spent in Heidelberg took a special place in my heart and nobody will take it from me.

Topping-out ceremony at the HCA 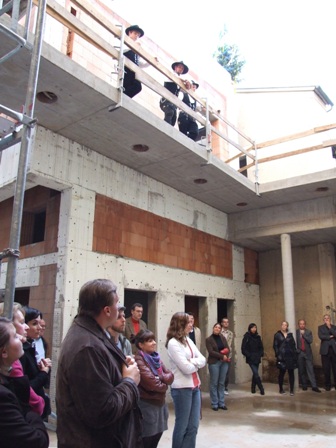 The HCA celebrated the completion of the roof structure of its extension on October 17, 2008, with a topping-out ceremony. According to German tradition, a tree was placed on top of the structure. The youngest artisan on the job delivered a traditional toast and as a symbol of his wish for further success, a glass was smashed.

Professor Junker, founding director of the HCA, stressed the importance of the extension for the institute. The annex will include a vitreous atrium and a second lecture hall outfitted with state of the art media and technology. Afterwards, Curt and Heidemarie Engelhorn, owners of the Palais and generous donors to the institute, commented on the meaning of American Studies and conveyed best wishes for the future of the institute. Everyone was invited to inspect the new but as yet only skeletal building. With food and beer, the workmen, architects, staff, and guests all celebrated the rest of evening.

HCA and the U.S. Presidential Elections

One of the most hard-fought and thrilling U.S. election campaigns culminated in the historic victory of Barack Obama on November 4. For the first time in U.S. history an African American was elected president. From the start of the campaign, the HCA organized election-related events and conducted research on specific aspects of the pre-election process. 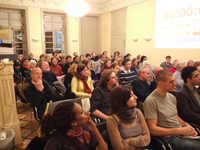 The presidential election in the U.S. not only attracted a lot of interest within the United States but was followed avidly by a worldwide public. The Heidelberg Center for American Studies (HCA) was no exception in this regard, as it featured a couple of well-received events throughout the year and regularly updated its website with relevant information.

The HCA’s presidential election season opened with a debate and exhibition on U.S. presidential elections as part of the “Nacht der Wissenschaft” (Night of Arts and Sciences) in November 2007. On the occasion of Super Tuesday on February 5, 2008, the HCA invited journalists for a press briefing on the primaries’ results. With the presidential race moving into its final phase in the fall, the HCA dedicated a number of successful events to this topic. Among these events was a debate between representatives from the German chapters of the major American parties – Democrats Abroad and Republicans Abroad. In November, the HCA hosted a panel discussion, where distinguished visiting fellow Robert Gerald Livingston, a former U.S. diplomat and member of the National Security Council who is now a senior fellow at the German Historical Institute in Washington, D.C., joined HCA experts Prof. Dr. Manfred Berg, Dr. Wilfried Mausbach, and Dr. Martin Thunert for an analysis of the election results. At these occasions, HCA’s Bel Etage was completely crowded. The HCA’s election season closed with the inauguration of President Barack Obama on January 20, 2009. Again, numerous German and U.S. citizens gathered for an event hosted jointly with the Democrats Abroad to watch CNN and witness the inaugural ceremony marking the peak of this historic presidential election.

Besides offering a forum for public debate with regard to the elections, the HCA conducted its own research on the campaign’s rhetoric. HCA’s Semtracks Project provided semantic analyses of the speeches and debates of the two presidential candidates Barack Obama and John McCain. The project’s innovative results triggered a lot of interest by the media resulting in a widespread national and international press echo. Thus in September and October HCA’s experts and projects were quoted or interviewed more than fifty times in leading national newspapers and broadcasting stations. 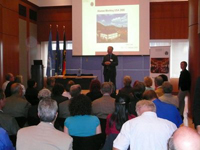 On Friday, October 10, 2008, Rector Bernhard Eitel officially opened the university’s U.S. presence. “Heidelberg University is constantly strengthening and broadening its wide range of international networks and co-operations around the world, especially with universities and colleges in the United States”, said Eitel. “We feel the need to further explore the field of international relations because academic and scientific work should not be hindered by borders or nationalities. The new challenges in a globalized world ask for the international academic community to work together in moving towards new scientific horizons and to join forces to address the emerging questions of the future.”

The new office in New York is an important step on the way to even closer cooperation between Heidelberg University and its counterparts in North America. Located in midtown Manhattan, close to the United Nations Headquarters, the office will support existing collaborations, assist in both developing new networks and creating joint degree programs, and serve as a resource and general contact base for Heidelberg University and its North American audience. 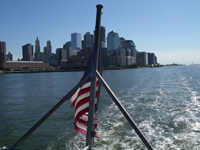 Heidelberg University, which from its inception more than 620 years ago explored close academic relationships with its European neighbors, has now expanded this international outreach even further. About 20 percent of graduates and undergraduates and some 35 percent of doctoral students come from abroad. In 2007, the university appointed a third of its professors from outside Germany.