Farewell at Heidelberg – MAS Commencement
Life after the MAS – Raluca-Lucia Cimpean
Presidential Election in the U.S.
Further News from the HCA
Upcoming Events at the HCA

In this edition you will get some insight into this spring’s highlights at the HCA. For example, you will find out how quixotic autodidacts are related to the MAS commencement 2012. Moreover, we take a look overseas, where the presidential election is drawing near. One of our current students shares his thoughts about what it feels like following politics at home, while he is living in a foreign country.

The annual Spring Academy Conference at the HCA took place in March. Find out more about it in this issue.

Please feel free to forward our newsletter to anyone interested in American Studies. Of course, we appreciate any feedback you would like to share with us. If you would like to learn more about the HCA’s recent development, please take a look at the Annual Report 2010/2011.

On Friday, April 13, the HCA’s MAS students celebrated their commencement in the Aula of the Alte Universität. The class of 2012 consists of fifteen graduates from eleven countries. It is the seventh class of Master students to have graduated from the Heidelberg Center for American Studies. 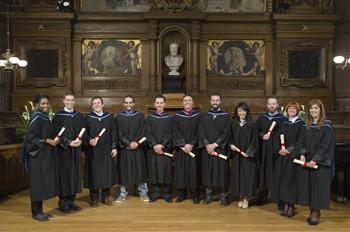 Professor Manfred Berg, Curt Engelhorn Professor of American History and Dean of the Faculty of Philosophy, welcomed the graduating class, their families and friends as well as the faculty and staff of the HCA. He extended his congratulations to the graduates and said that he found it “gratifying to see how the hard work and dedication” of the students had paid off. In his address to the graduates, Professor Junker, the founding director of the HCA, warmly congratulated the graduating class. He described the unusual and enriching circumstances of their time at the HCA: The highly international mix of students and the small group size created a unique environment for academic study as well as personal development. Their studies at the HCA allowed the students to gain “inside knowledge from an outside perspective on all things concerning the United States,” as Professor Junker put it; it also gave them the chance to transcend their personal boundaries regarding religion, culture and countries.

The keynote speaker, Professor Christopher Bigsby of the University of East Anglia, then gave a British perspective on the question “What, then, is the American?” The scholar of American Studies made a confession: “I am a professor of American Studies – but I do not understand America.” He added that his only consolation was that he did not think the Americans understood it, either. Bigsby regarded his question of what exactly the American was both relevant and hard to answer due to the heterogeneity of the American society. While he disapprovingly commented on issues such as the high infant mortality and crookedness of politicians in America, he was also utterly clear in his admiration for the freedom the United States offers. He claimed that nobody went to America to remain who they were but to become someone new. Comparing the United States to a perpetual construction site and calling its citizens shape shifters, Professor Bigsby came to a positive conclusion; namely that, despite all problems the superpower may have, it remained the hope of the world for many people, including himself: “Whether I understand it or not – it remains my America, my newfound land.”

After a musical interlude by jazz pianist J. Hatch, the graduates were awarded their diplomas. Eleven students rose and individually stepped onto the stage to accept their degrees from Professor Junker and the dean. Evan Regis Cacali was presented as the valedictorian of the class of 2012 for his outstanding academic achievements and his thesis titled “The Way The Whole Darn Human Comedy Keeps Perpetuating Itself: Dialogism, Appropriation, and Intertextuality in the Big Lebowski.” In his speech he thanked the friends and families of all students for their support as well as the professors, faculty and staff of the HCA for their guidance and patience. The speech centered around two words, “quixotic” and “autodidact,” which, as the valedictorian explained, had come to describe his own academic path. He bode his fellow graduates farewell with the words: “May you all foolishly follow your dreams.” After the commencement ceremony at the Alte Universität the graduating students and their guests gathered for a reception with the faculty and staff at the HCA’s home, the Curt and Heidemarie Engelhorn Palais. Congratulations to the MAS class of 2012!

Life after the MAS – Raluca-Lucia Cimpean

Raluca-Lucia Cimpean received her M.A. in American Studies from the University of Heidelberg in 2006. She stayed in Heidelberg to become one of the first graduates of the HCA’s Ph. D. program in 2010. Her dissertation is entitled “John F. Kennedy through the Looking Glass: Docudramatic Representations of the JFK Image.” In the following abstract, Raluca tells us about her life after the MAS.

I researched my PhD dissertation at John F. Kennedy Presidential Library and Museum, Boston and the Library of Congress, in the spring and summer of 2008. I spent some more time to revise and complete my doctoral work in the JFK Library in the spring of 2010.

I am trying to pursue an academic career. So far I have had two temporary teaching positions in the US: I have taught the course “JFK through the Looking Glass” at Experimental College, Tufts University, in the spring semester of 2011 and the course “The Kennedys of Boston” in the American Studies Department at the University of Massachusetts Boston. I will continue teaching at UMass Boston in the American Studies Department and the Honors Program.

Presidential Election in the U.S. – Tony Rush on remaining an educated citizen while living abroad

In moving to Germany to study for one and a half years, I did not leave my life behind me. I am still a brother, a cousin, a friend, a son, an avid runner, a student, an officer in the U.S. Navy and more. But one of the most important roles I maintain is being a citizen of America.

Without a doubt, it is difficult to remain an educated citizen while living in America, let alone in a foreign country. Especially during an election year, remaining a well-informed citizen while abroad requires determination. Even with the right motivation, I have found there are two main difficulties in keeping up to date with the news while living in Germany. The first I experienced was the lack of a TV in my apartment, but thankfully there is the Internet. At the same time, it takes a conscious effort to focus on reading the news and not getting distracted on the internet. Fortunately for me, I enjoy reading the news; so most mornings, while eating breakfast, I get my news off the Internet from several U.S. news sources. Another convenient way to avoid the no TV issue is through discussion with my classmates, who come from around the world, offering a broad range of views and opinions.

The second major difficulty is the time change from the U.S. to Germany. In particular, this made following the Republican primary debates hard but not impossible. I am sure the same issue will arise again with the presidential debates before the election this November. As the debates would occur in the early hours of the morning in Germany, I had to find time in my schedule to search YouTube for a video of the debate or search the Internet for a transcript of the debate proceedings. Unlike turning on the TV during US prime, finding time to set aside to watch or read the debates on your own is challenging, especially as a student with a considerable workload. Nevertheless, in taking my civic duty as a citizen seriously, it is not unmanageable to work into my schedule; it simply takes willpower, prioritization and effort.

Additionally, as a member of the military, there are advantages with what is available at the nearby army base. First, whether I am at the gym or at the food court on post, there are TVs with the news constantly on. So, for instance, while cycling I can plug my headphones into the audio receiver and watch the news. It is very convenient for me as I get to stay in shape, both physically and civically. Second, there is the U.S. military independent newspaper in English, which is useful as my German is not the best. While the Internet is a valuable source, the newspaper as well is a trusted way for me to stay informed.

In the end, the upcoming elections provide Americans – both at home and abroad – with critical duties: to remain educated and to vote. Given our hectic lives, this is not a simple task. Living abroad only compounds that responsibility. But with the right mindset and resolve to dutifully educate yourself, you can perform this responsibility sensibly, as my American classmates and I have been doing while studying here in Heidelberg.

From March 26 to March 30, the Heidelberg Center for American Studies hosted the Spring Academy for the ninth time. From 115 applicants, 22 from Europe, the United States, and Asia were invited to present and discuss their dissertations projects at this annual interdisciplinary conference on American history, culture, and politics. 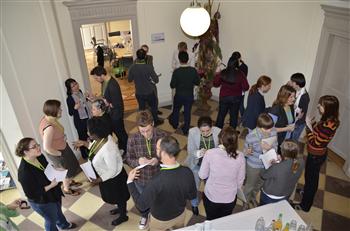 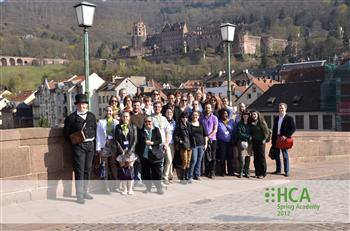 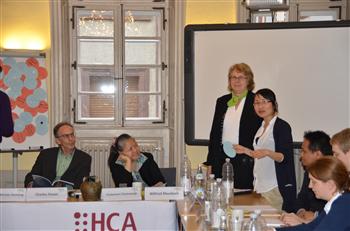 This year’s participants hailed from 11 different countries: the United States, Germany, Great Britain, the Netherlands, Italy, Poland, Ukraine, Hungary, Romania, Vietnam, and the Philippines. As American Studies is a wide-ranging and interdisciplinary field, the conference included the following disciplines: history, law, cultural studies, literary studies, film studies, political science, art and music. The academic part of the conference was divided into three workshops, 11 panels, and a final cool-down session. The presentations were carefully paired up and chaired by experts, who introduced the presenters, connected the talks thematically, and moderated the discussions. Thus, these themed panels provided new inspiring perspectives on the respective research for each participant.

In addition, three guest speakers from the United States and Thailand were invited to facilitate two workshops and chair three panels, giving the participants the opportunity to discuss issues of movie adaptions and the historical roots as well as the contemporary relevance of the Tea Party.

Weaved into the conference program were several social events, such as dinners at traditional restaurants, a historical tour of Heidelberg, and a wine and cheese evening. These events gave participants a chance to continue their discussions in an informal and relaxed environment and make future contacts.

Upcoming Events at the HCA