MASNEWS 1/2017:
The HCA Welcomes New Students and an Old Friend

This edition features our current MAS students’ first intercultural experiences upon their arrival here in Heidelberg. We also report about U.S. Consul General James Herman’s visit at the HCA. Finally, we compiled some interesting data on our MAS students’ educational background before applying to the MAS program and about their careers after their graduation from Heidelberg University.

Please feel free to forward our newsletter to anyone interested in American Studies. Of course, we appreciate any feedback you would like to share with us. If you would like to learn more about the HCA’s recent developments, please have a look at the Annual Report 2015/2016, which is now online.

Living and studying abroad with students from all over the world can be a challenge in many different ways. A few of our new MAS students were willing to share some of their intercultural experiences during their first days in Heidelberg.

​Moving to Heidelberg has been a lot of fun, and so far, there haven't been too many hiccups. The HCA has been so welcoming and has offered a lot of advice during my first few months settling in. However, I still have had to learn some things on my own: Don't cross the street if the light is red, trams and buses are ruthless and won't wait for you, if you say you don't want cake the first time, too bad - you won't get asked again, 9 a.m. classes start at 9.15, cars drive on the right hand side of the road, take your own bags to the supermarket, and, most importantly, never address your professors by their first name. I'm definitely not in NZ anymore.

​I really enjoyed my first semester in Heidelberg. It has been easy to adapt to the HCA as everyone is approachable and willing to help. In terms of exploring Heidelberg, we have generally done that as a group. For example, on one of the first weekends of the semester we decided to walk the “Philosophenweg” together and went to the restaurant “Vetter” afterwards for some traditional German food and Heidelberg beer.

​With the ending of Chinese New Year 2017, I have walked through one third of my MAS journey. It was a really tight and busy semester for me. Though confronted with some difficulties in my life and studies, I am gradually finding a way to solve them. The lectures and tutorials enlighten me from different perspectives, which I have never experienced before. My motivation to study here is to find something interesting that stimulates my thinking towards my future life plan. Besides, I enjoy my stay in Heidelberg, a place I will definitely miss when I leave someday. Life is a long journey and full of wonders, and I will strive hard to make it count.

​I grew up in Germany and my German sounds completely native, even though it may not be fluent anymore. I was in the supermarket and talking to my mother on the phone in French. I don’t think I was particularly loud, but people could hear I was speaking in a foreign language. These two old ladies were complaining about me and my bad manners in a very old lady type of way, until I switched the conversation into German and started moaning about how much I hated old people and how they never mind their business. The two old ladies gave me the most embarrassed fake smile and went into another aisle before I could even explain to my mother why I had suddenly switched to German.

Yes! The bus! That was my first day arriving in Heidelberg. My friend took me to dinner near Heidelberg’s Bismarckplatz and kindly offered to accompany me home. I refused because I didn't want to trouble her and also didn't want her to treat me like a kid. But what happened during the next hour made me regret my decision. I was on the tram to Eppelheim and couldn't clearly remember the name of my stop, so I got off where the surroundings looked familiar to me. Apparently, it was the wrong stop. I walked a little further but I couldn't find the stop where the tram back-to-town would pass. I was a little scared, but I was lucky to be able to hunt down a lady on her bike to ask her for help. She was so kind to tell me that I needed to walk back because the trams shared the same stop there. While I was walking back, the tram had just left, which meant I had to wait for another half an hour to get on the next one. When it finally arrived, it seemed like it was laughing at me, a stranger. But that was not the end. When I finally got on the bus and knew where I was going, it didn't stop. It passed the stop and kept going. At that time I knew that I should’ve pressed the button to let the driver know someone's getting off there. I arrived at home at around midnight after a twenty-three-hour flight. Now that I have already gotten used to the bus system here, I don’t get myself into trouble anymore. This story is my first experience in Heidelberg as well as Germany, and it is a very precious memory to me.

​I like wandering along the main street of Heidelberg. Every time I look up, the buildings on the two sides of the street frame the sky and clouds in different shapes.

In Heidelberg, I took the first picture of the stars with my camera, capturing Orion in the winter sky. 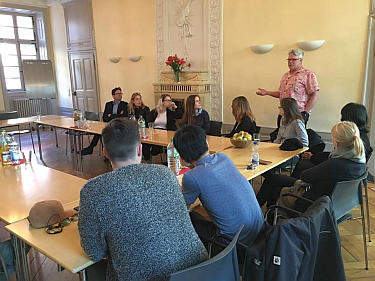 On a Thursday afternoon during the semester break, James Herman spontaneously paid a visit to the HCA and invited students and faculty for an informal meeting. He introduced his work and the duties and responsibilities of the U.S. Consulate General in Frankfurt to international students from Azerbaijan, China, the U.K., the U.S. and Germany.

Following the introduction, he answered controversial questions concerning G-20, NATO, and the future of transatlantic partnership under the new administration. The students were especially interested in human rights issues and participated vividly in the discussions. James Herman gave everyone a great insight to the challenges of the changing administration as well as his life as a Consul General. Everyone at the HCA enjoyed reconnecting with James Herman, and we look forward to welcoming him back soon.

Before and After the MAS in Numbers

During our MAS application process, we receive numerous inquiries about the educational background of our M.A. students and about the sectors of occupation of our MAS alumni. We decided to compile the data of the last five years to give you an idea what our M.A. students did before and do after their studies in Heidelberg.

If you are an MAS alumnus/a and would like to update your current career status or simply get back in touch, please write us an email (mas@uni-hd.de). We look forward to hearing from you. In a next step, we will compile data from the MAS Classes 2005 to 2009. Again, we would love to hear from you and what you are doing now. 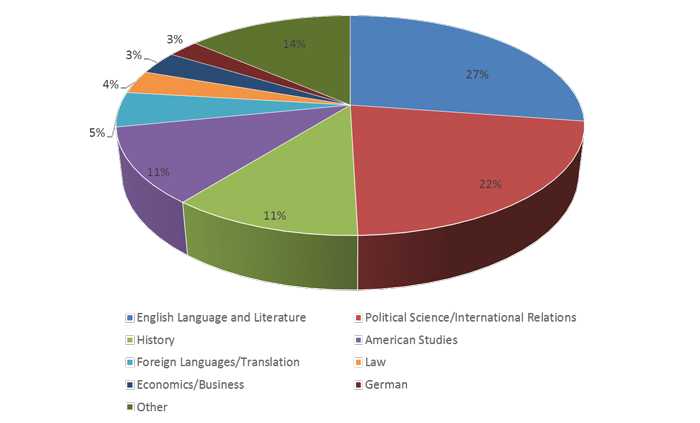 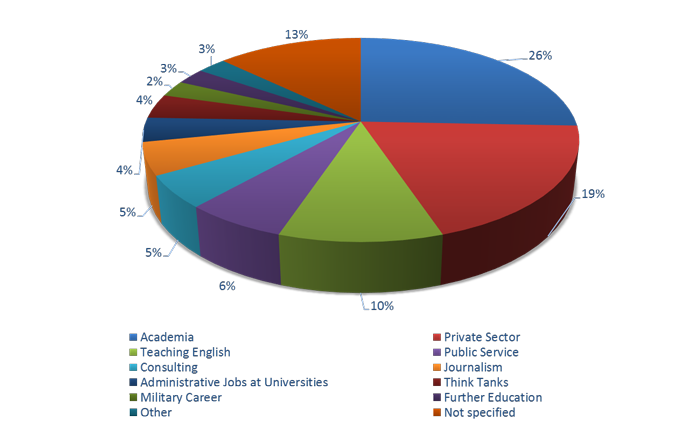 The HCA is calling for applications for the MAS class of 2019. The due date for applications is March 31, 2017. We strongly encourage and invite our readers to spread the word among friends, family, and colleagues who are interested in American Studies. For further information, please check the MAS admission page.

For all events, check our website for details. Most HCA events are chronicled on our retrospect page.