MASNEWS 2/2016:
The American Dream Lives Large at the HCA

Welcome to a new issue of the Heidelberg Center for American Studies’ MAS newsletter!

This edition features the HCA’s commencement celebration for the B.A., M.A., and Ph.D. classes of 2016. Current MAS student Jessica Hagen writes about her life alongside the MAS. Ana Maric-Curry (MAS Class of 2011) shares how her academic and personal life have evolved after the MAS. Finally, Zachary Holler, a current MAS student, reports about the first student conference at the HCA, where he participated in the panel discussion about the American Dream in the 21st century.

Please feel free to forward our newsletter to anyone interested in American Studies, and, of course, we appreciate any feedback you would like to share with us.

On April 22, students, staff, family, and friends of the HCA gathered in the old lecture hall of Heidelberg University to celebrate the graduation of 38 of the HCA’s B.A., M.A., and Ph.D. students. The commencement festivities were opened by the Papermoon Orchestra, a musical duo consisting of Johannes Alisch on the contrabass and Alexander Schindler on the piano, whose intimate yet entertaining jazz music wonderfully accentuated the event.

Inspired by the historic location, Rector Bernhard Eitel praised the long tradition of international academic exchange embraced by the Ruperto Carola. He was proud to see such a diverse group of graduates participating in the traditional commencement ceremony and congratulated all of them on their academic achievements. Reminding the graduates about their responsibility to shape the global future, he encouraged them to remain positive, curious, and engaged and invited them to return to Heidelberg University on their future career paths. Rector Eitel’s congratulatory address was followed by Professor Detlef Junker, the HCA’s founding director, who was not only proud to welcome such a great number of graduates but also delighted to see students from all three study programs of the HCA coming together for their commencement for the first time. He extended his good wishes to the nineteen BAS graduates who had had the opportunity to participate in the HCA’s multidisciplinary international program and gather experiences worldwide. He was glad to see eleven MAS graduates from different backgrounds who came together at the HCA to experience and study new cultures. Moreover, he congratulated eight Ph.D. graduates on completing their demanding journey and praised them for their exceptional and original research projects. Professor Junker stressed that even though the HCA’s multidisciplinary study programs were challenging, all of the graduates completed them successfully. Thanks to the generosity the Schurman Verein and the Friends of the HCA, the institute was able to offer such a unique study opportunity to a variety of different aspiring scholars. Professor Junker’s good wishes resonated with Steven Hill’s keynote address.

As a rigorous advocate for social, environmental, and governmental change, Steven Hill, who is a Senior Fellow with the New America Foundation and a Holtzbrinck Fellow at the American Academy in Berlin, used the opportunity to raise awareness for the changing employment market, which he discussed in his recent book Raw Deal: How the ‘Uber Economy’ and Runaway Capitalism are Screwing American Workers.

After the diplomas had been handed to the graduates by Professor Junker, Maren Schäfer of the MAS Class of 2016 was awarded this year’s book prize. In her valedictorian speech, she praised the HCA’s master’s program as a unique opportunity to engage with people from different cultural backgrounds and, as a result, become more familiar with one’s own as well as the American culture. Going abroad as well as participating in the multidisciplinary approach of the HCA had broadened her horizon significantly, for which she extended her gratitude to the professors, advisors, staff, and students of the HCA, as well as to their families and friends. After a musical interlude the celebration moved to the Atrium and the Bel Etage of the HCA. Accompanied by the Papermoon Orchestra, students, faculty, and family celebrated the occasion with food, drink, and good conversation for the rest of the night. We congratulate all graduates of the B.A., M.A., and Ph.D. classes of 2016!

Life Alongside the MAS

Jessica Hagen, a student in the MAS Class of 2017, details her activities alongside her MAS studies. She works at SAP, a German software company; tutors an eighth grader; and is traveling widely.

​​I am Jessica Hagen, and I am a member of the MAS Class of 2017. Before I started in Heidelberg, I taught English at the University of Mainz and at private companies in Mannheim and Wiesbaden. I also spent a year as a Fulbright English teaching assistant in Ludwigshafen in 2010.

During the week, when I am not at the HCA, you can find me at SAP in Walldorf, where I am a working student. I work on a team that delivers user assistance materials, like software documentation, to customers. My responsibilities include language editing, running reports, and maintaining Wiki pages for internal training purposes.

On the weekends, I tutor an eighth grader in English. I also enjoy spending time with my husband, Stefan, and our two cats, Chloe and June.

I like to travel with my husband, as well. Our latest adventure was to visit my parents in Michigan over Christmas, and our favorite places to visit are the Öztal in Austria for whitewater rafting and London for sightseeing and visiting friends. My dream destination is Hawaii, and I am hoping to celebrate the completion of my MAS with this trip!

Life After the MAS

Ana Maric completed her M.A. at the HCA in 2011. Currently, she is writing her Ph.D. dissertation on migration from the former Yugoslavia to Germany and the US. She moved to Georgia, USA, with her family in 2014.

​During a formative internship at the German Historical Institute in Washington, DC, I decided to apply to the HCA after completing my B.A. in history and political science at the University of Tuebingen. An international flair combined with a traditional student town and excellent education is what I was looking for and Heidelberg and the HCA delivered above all expectations. It was the best decision I made in my life. 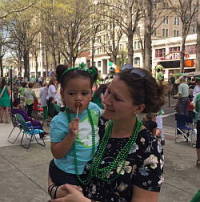 ​I grew academically through the vast variety of subjects, perspectives, and approaches, and I made friends for life. The HCA gave us plenty of room to engage in discussion, not only during class, but also during the countless evening lectures and other social gatherings.

In the course of our last semester of the MAS, the first BAS class was admitted to the HCA and I was honored to teach a seminar of “Soft Skills for Academics” to them. Through that seminar and other TA work, I stayed connected to the HCA for several years after my graduation. In 2011, I became the assistant to the executive director of the German Association for American Studies (DGfA). In this job, I was able to use the communications and analytical skills, but also the subject matter expertise learned during the MAS. Before moving to the US with my family in 2014, I started a Ph.D. project in contemporary history at the University of Mannheim, where I concentrate on migration from the former Yugoslavia to Germany and the US.

We are planning on making our way back to Germany in the coming years and Heidelberg is always on the short list of places to move back to.

On July 1–2, a group of B.A. students organized the first student conference at the HCA. B.A., M.A., and Ph.D. students discussed important issues in contemporary America and engaged in intellectual discussions. The conference served as their final project for the interdisciplinary seminar under the guidance of Dr. Tobias Endler, Dr. Wilfried Mausbach, and Dr. Anne Sommer. 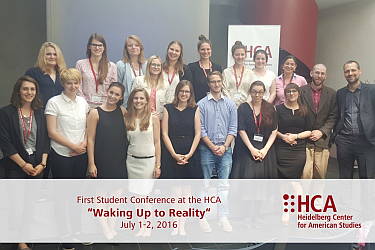 ​​The student conference discussed the American dream in the context of gender, class, and race. The debate was a healthy formulation of deeply held principles and an honest search for the truth. Student disciplines ranged from English to environmental studies, ensuring an interdisciplinary process as espoused by the HCA. Within the three criteria for discussion, hot-button issues arose, such as the LGBTQIA equality, class hierarchy, and racial privilege. These presentations focused on the ideological borderlands that challenge the egalitarian concept of the American dream. Is class mobility possible in contemporary America? How does white privilege influence race relations? These and other similar panel questions expressed the paradigm dramas oppressing minority communities. The German sociologist, Winfried Fluck, claims that these outlying issues will either help America return to its core values or become the prevalent focus of society. The underlining question remains whether these challenges undermine or support the dream.

While I might disagree with some gender, class, and race problems as clear and present dangers to the individual’s pursuit of happiness, I found the disagreement healthy. Most of the speakers were willing to continue the discussion outside of the conference— a generous act that proved helpful in reaching an understanding. I found the second panel on class in America as the most useful and influential of the discussions, challenging initial assumptions that I carried pertaining to how “classes” view themselves and others in the 21st century.

Overall, I walked away with recommended readings and a new perspective on some current events. All praise to the students and their mentors who committed their time and effort in creating this conference! To summarize the experience, the American dream is not a synonym for the United States; neither is it a fixed, cemented artifact that all individuals strive to acquire. The American dream is an evolving process of the individual to pursue his or her own idea of happiness. America should be free ground to pursue your dream; a place where no person born to gender, class, or race must bend according to a fixed hierarchy. It is a cherished idea because it foundationally asserts that everyone has value. Whether or not the dream still lives in the twenty-first century is open to debate, but the standard of the dream still challenges us to aspire.