MASNEWS 2/2017: A New Research Program and Many New Faces

This edition features our Commencement 2017 and an introduction and welcome of our visiting scholar James Strasburg. We also report about the HCA’s newest research program, the Graduiertenkolleg “Authority and Trust in American Culture, Society, History and Politics,” which was approved late last year by the German Research Foundation (DFG).

On April 28, the HCA celebrated the commencement of the BAS, MAS and Ph.D. classes of 2017 in the lecture hall of the Old University. The ceremony opened with greetings by the rector of Heidelberg University, Professor Bernhard Eitel. He conveyed the best wishes of the Ruperto Carola to the newly-minted graduates and wished them luck for all their endeavors, acknowledging the university’s motto “semper apertus” (“always open”). 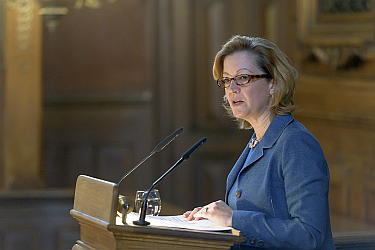 Professor Detlef Junker, the founding director of the Heidelberg Center for American Studies, then welcomed the graduates and their families as well as the friends of the HCA. He emphasized the interdisciplinary and intercultural aspects of the HCA programs and encouraged the graduates to put their expertise about the United States to good use. He then introduced the commencement speaker, Heidi Crebo-Rediker, who is an adjunct senior fellow at the Council on Foreign Relations and the CEO of International Capital Strategies. The 2017 commencement speech on “Multilateral Ties That Bind” started out with a look back at the 2016 U.S. presidential elections, which have raised questions about the future role of the United States in the world. Heidi Crebo-Rediker, who—as the U.S. State Department’s first chief economist—has provided advice and policy analysis to then-Secretary of State Hillary Clinton, emphasized something HCA students have certainly experienced: as long as the ties that bind us are stronger than the forces that try to tear us apart, everything will be fine. The multilateral ties at the HCA bind students together and ties among countries work the same way: For common purposes and challenges, countries work together and communicate with each other, even though each has its own interests. Heidi Crebo-Rediker hopes that this will hold true for the current U.S. administration because problems such as climate change, energy security, migration, or economic crises can only be solved by international cooperation. Yet, multilateralism could be at a crossroads. While the U.S. has a multilateral tradition, the new administration seems openly opposed to it. However, Heidi Crebo-Rediker thinks that after a certain period, the U.S. will realize that by cooperating with other countries it can exercise more power than by acting on its own. If not, other countries could assume leadership role and promote multilateralism. She illustrated this by pointing to the role of the World Bank and the International Monetary Fund, two institutions that depend on multilateralism. U.S. support for both institutions has waned, and other countries seem to be ready to take on responsibility. China, for instance, has proposed the foundation of Asian Infrastructure Investment Bank. Overall Heidi Crebo-Rediker thinks that the U.S. should embrace and maintain its tradition of multilateralism.

After the presentation of the diplomas and a fabulous rendition of George Gershwin’s “Rhapsody in Blue” by the Papermoon Orchestra, the valedictorian of the MAS Class of 2017, Aljay Pascua, shared some of his memories of the HCA. Following the ceremony, the graduates and their family and friends joined the other guests for a reception at the HCA, where they reminisced and made future plans. Congratulations to all 2017 graduates!

The HCA’s newest research program, the Graduiertenkolleg "Authority and Trust in American Culture, Society, History, and Politics" (GKAT), will start at the beginning of October, bringing 10 Doctoral Candidates and a Postdoctoral Researcher to the HCA. Funded by the German Research Foundation (DFG) the program aims at inspiring innovative doctoral dissertations in the field of American Studies, focusing specifically on questions of authority and trust in the United States since the nineteenth century.

In recent decades, American society and culture have become increasingly polarized. Studies show that American institutions and elites are suffering from a dramatic loss of authority and trust. Economic inequality, social and spatial segregation and a decaying infrastructure have undermined trust in the fairness and efficiency of political processes. Anti-establishment populism and conspiracy theories resonate widely among the general public. Police brutality has reinforced a deep-seated distrust of authorities among minorities. Commentators and scholars agree that the crisis of authority and trust has been developing for decades and reflects the dissolution of social cohesion and consensus. Many Americans lament the end of the American Dream, the prospect of social upward mobility through hard work and educational achievement. The crisis of authority and trust has also affected U.S. leadership in world politics and the global economy.

Against this background, the GKAT research group, initiated by a group of 10 Heidelberg professors and researchers led by Prof. Dr. Manfred Berg (speaker) and Prof. Dr. Günter Leypoldt (co-speaker), aims at a systematic and interdisciplinary inquiry into the emergence and transformation of authority and trust in the U.S. from the nineteenth century to the present. The new doctoral candidates funded by GKAT will conduct research in three broad areas (“The Authority of the Modern State and Trust in Public and Social Institutions,” “The Urban Dimension of Authority and Trust” as well as “Authority and Trust in Culture, Literature, and Religion”), which offer platforms for cooperation between diverse fields such as Geography, History, Linguistics, Literary Studies/Cultural Studies, Political Science/Social Science, and Religious Studies/Theology.

With personal and academic backgrounds in Germany, Poland, Denmark, Scotland, the U.S., and New Zealand, GKAT researchers will approach these topics in the HCA’s interdisciplinary tradition and will also bring inter- and transnational perspectives to their projects. In addition, they will profit from a multi-level mentoring and qualification program designed to enable them to conduct their research in interdisciplinary and international networks and to complete their dissertation within a period of three years. We are delighted and excited to welcome this new group of scholars to the HCA in October!

James Strasburg has been a visiting scholar at the HCA this past summer and will join the HCA’s faculty for the 2017-18 academic year as part of Prof. Stievermann’s team. His research focuses on American religious history, and he teaches several seminars at the HCA. Today, he shares insight into his time and experiences here.

Through the Notre Dame-Heidelberg partnership, I have been spending the 2017 Summer Semester as a “Gastwissenschaftler” at the HCA. My time here has been excellent so far. The entire HCA staff welcomed me with kindness and generosity, and I quickly felt at home. The HCA has also provided a collegial intellectual community that has nurtured and strengthened my academic work. Participating in the PhD Student Colloquium stands out especially in this regard. It provided me an opportunity to network with other HCA faculty and students and to receive excellent feedback, questions, and constructive criticism on my own research. Teaching two “Übungen” at the HCA has also been an enjoyable and challenging endeavor. I have found the students to be sharp, engaged, and eager to explore major themes in American religious and diplomatic history. Altogether, I am grateful for this opportunity and am eager to see the partnership between Notre Dame and Heidelberg grow further.

For all events, check our website for details. Most HCA events are chronicled on our retrospect page.