The James W.C. Pennington Award of the Heidelberg Center for American Studies and the Faculty of Theology of Heidelberg University

In 2011, the Heidelberg Center for American Studies (HCA) and the Faculty of Theology of Heidelberg University established the James W.C. Pennington Award. The first awards were generously endowed by the Manfred Lautenschläger Foundation. The prize pays tribute to the African American churchman and former slave James W.C. Pennington, who in 1849 received an honorary doctorate from Heidelberg University. Born in 1809, Pennington escaped bondage at the age of eighteen. He learned to read and write, and in 1834 was the first black man to attend classes at Yale University. In 1838 he was ordained a minister of the Presbyterian Church. At the 1849 World Peace Congress in Paris, Pennington was befriended by the Heidelberg scholar Friedrich Carové. Pennington so impressed Carové that in the same year he persuaded the Heidelberg Faculty of Theology to confer a doctoral degree on the black minister. It was the first time that an African American received this highest academic honor from a European university and perhaps from any university worldwide.

The James W.C. Pennington Award is given to scholars who have done distinguished work on topics important to Pennington: slavery, emancipation, peace, education, reform, civil rights, religion, and intercultural understanding. The award encompasses a month-long stay in Heidelberg to engage in research on and discuss these topics. On the occasion of the award ceremony, recipients give a public lecture exploring new avenues in their respective fields of research. When the new award was inaugurated in June 2011, US President Barack Obama sent official greetings to the HCA to convey his gratitude for the initiative and express his conviction that honoring Pennington’s achievements would inspire future generations of Americans and Germans. 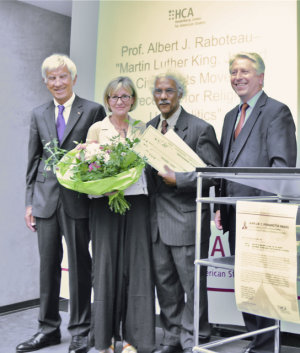 The first James W.C. Pennington Award was bestowed on Albert J. Raboteau, Henry Putnam Professor of Religion at Princeton University, on June 14, 2012. Professor Raboteau’s ceremonial address at the Curt and Heidemarie Engelhorn Palais was entitled "Martin Luther King, Jr. and the Civil Rights Movement as Precedent for Religion in U.S. Politics." During his stay Professor Raboteau also taught a seminar on African American religious history together with Professor Jan Stievermann. Albert J. Raboteau earned his Ph.D. in religious studies in 1974 at Yale University after completing degrees at Loyola University in Los Angeles and the University of California, Berkeley. He has been teaching and conducting research in Princeton since 1982. In his published works, Professor Raboteau focuses mainly on American and African American religious history and immigration issues. 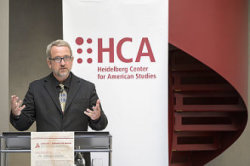 Paul Harvey, who received the eighth W.C. Pennington Award, is professor of history and Presidential Teaching Scholar at the University of Colorado, Colorado Springs. He researches, writes, and teaches in the field of American history from the sixteenth century to the present. Professor Harvey is the creator and “blogmeister” of the nationally known professional scholarly blog Religion in American History and a contributor to the online journal Religion Dispatches. He is the author/editor of eleven books and numerous articles, most recently of Christianity and Race in the American South: A History (2016), and Bounds of Their Habitation: Religion and Race in American History (2017). Professor Harvey’s recent co-authored book The Color of Christ: The Son of God and the Saga of Race in America, was named a "Top 25 Outstanding Academic Title" by Choice magazine in 2013. His narrative history survey Through the Storm, Through the Night: A History of African American Christianity (2011) also received the designation of "Outstanding Academic Title" by Choice magazine. Professor Harvey is also co-editor of the reference work The Columbia Guide to Religion in American History. Other publications of note include Redeeming the South: Religious Cultures and Racial Identities Among Southern Baptists, 1865-1925 (1997) and Freedom’s Coming: Religious Cultures and the Shaping of the South from the Civil War through the Civil Rights Era (2005). In 2008, he was the Lamar Lecturer in Southern History at Mercer University. The University of Colorado named him Presidential Teaching Scholar in 2009, and from 2007-09 he served as the Senior Mentor to the Young Scholars in American Religion program at IUPUI in Indianapolis. He received his Ph.D. from the University of California, Berkeley, in 1992. 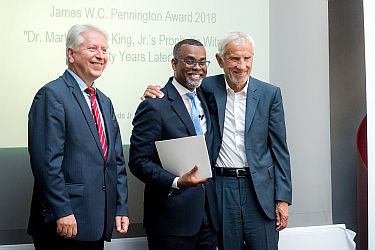 The seventh recipient of the James W.C. Pennington Distinguished Fellowship, Eddie S. Glaude is the James S. McDonnell Distinguished University Professor at the Department of Religion and African American Studies at Princeton University and the chair of the Department of African American Studies. He is currently president of the American Academy of Religion. He holds a master’s degree in African American Studies from Temple University, and a Ph.D. in religion from Princeton University. He began his teaching career at Bowdoin College and has been a visiting scholar at Amherst College and Harvard. In 2015, he was awarded an honorary doctorate from Colgate University. His books include Democracy in Black: How Race Still Enslaves the American Soul (2016); African American Religion: A Very Short Introduction (2014); In a Shade of Blue: Pragmatism and the Politics of Black America (2007); and Exodus! Religion, Race and Nation in Early 19th Century Black America (2000), which was awarded the Modern Language Association’s William Sanders Scarborough Book Prize. Eddie S. Glaude is also the author of two edited volumes and many influential articles about religion for academic journals. He has also written for the The New York Times, The Huffington Post and Time Magazine and regularly provides commentary on radio and television news programs like Democracy Now!, Morning Joe, and the 11th Hour. Currently Eddie S. Glaude is at work on a book about James Baldwin, tentatively titled James Baldwin’s America, 1963-1972. 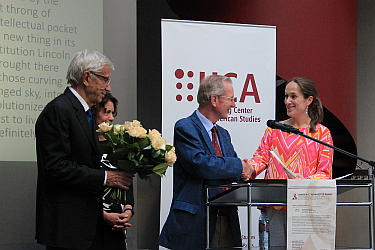 Harry S. Stout is the Jonathan Edwards Professor of American Christianity at Yale Divinity School and the sixth recipient of the James W.C. Pennington Distinguished Fellowship. He is the author of several books, including Upon the Altar of the Nation: A Moral History of the Civil War (2006); The Divine Dramatist: George Whitefield and the Rise of Modern Evangelicalism (1991); The New England Soul: Preaching and Religious Culture in Colonial New England (1986) and co-edited several volumes, among them Jonathan Edwards at 300: Essays on the Tercentenary of His Birth (2005); Religion and the American Civil War (1998); Readings in American Religious History (1997); Dictionary of Christianity in America (1990) and is currently coediting Religion in American Life, a seventeen-volume study of the impact of religion on American history for adolescent readers and public schools. Professor Stout is general editor of both The Works of Jonathan Edwards and the “Religion in America” series for Oxford University Press. He has written articles for the Journal of Social History, Journal of American Studies, Journal of American History, Theological Education, Computers and the Humanities, and Christian Scholar’s Review. He is a contributor to the Concise Encyclopedia of Preaching, Biographical Dictionary of Christian Missions, and the Reader’s Encyclopedia of the American West. In 2003 Professor Stout was awarded the Robert Cherry Award for Great Teaching. In 2011-12 Professor Stout held the Rogers Distinguished Senior Fellowship at the Huntington Library. He currently serves as general editor and director of the Jonathan Edwards Center and is working with Tony Blair in the Tony Blair Faith Foundation, an organization designed to promote interfaith dialogue around the world. 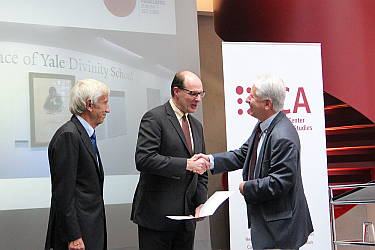 John Witte, Jr., JD (Harvard), is Robert W. Woodruff Professor of Law, McDonald Distinguished Professor, and director of the Center for the Study of Law and Religion at Emory University. He is a specialist in legal history, marriage law, and religious liberty. Professor Witte’s writings have appeared in 15 languages, and he has delivered more than 350 public lectures throughout North America, Europe, Japan, Israel, Hong Kong, South Korea, Australia, and South Africa. With major funding from the Pew, Ford, Lilly, Luce, and McDonald foundations, he has directed 12 major international projects on democracy, human rights, and religious liberty, and on marriage, family, and children. These projects have collectively yielded more than 160 new volumes and 250 public forums around the world. He edits “Emory University Studies in Law and Religion” (Eerdmans) and “Cambridge Law and Christianity Series” (Cambridge University Press). Professor Witte has won dozens of other awards and prizes for his teaching and research. Recent book titles include: Religion and Human Rights: An Introduction (Oxford University Press, 2012); From Sacrament to Contract: Marriage, Religion, and Law in the Western Tradition (Westminster John Knox Press, 2d ed., 2012); No Establishment of Religion: America’s Original Contribution to Religious Liberty (Oxford University Press, 2012); The Western Case for Monogamy over Polygamy (Cambridge University Press, 2015); and Religion and the American Constitutional Experiment (Oxford University Press, 4th ed., 2016). 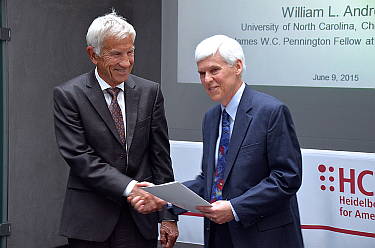 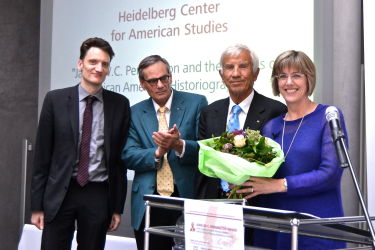 Laurie Maffly-Kipp is a Distinguished Professor at the John C. Danforth Center on Religion and Politics at Washington University in St. Louis and the third recipient of the James W.C. Pennington Distinguished Fellowship. She received her B.A. from Amherst College in English and Religion and completed a Ph.D. in American History at Yale University. Prior to joining the Danforth Center in 2013, Professor Maffly-Kipp was at the University of North Carolina at Chapel Hill where she taught in Religious Studies and American Studies. Her research and teaching focus is on African-American religions, religion in the Pacific borderlands of the Americas, and issues of intercultural contact. Professor Maffly-Kipp’s publications are many and include: Religion and Society in Frontier California (1994), which explores the nature of Protestant spiritual practices in Gold Rush California; articles on Mormon-Protestant conflicts in the Pacific Islands, African-Americans in Haiti and Africa, and Protestant outreach to Chinese immigrants in California; a volume of essays entitled Practicing Protestants: Histories of Christian Life in America, 1630-1965 (2006) with Leigh Schmidt and Mark Valeri; a co-edited collection of essays about Mormonism in the Pacific World, Proclamation to the People: Nineteenth-Century Mormonism and the Pacific Basin Frontier (2008). Most recently she authored Setting Down the Sacred Past: African-American Race Histories (2010); American Scriptures, a Penguin Classics anthology of sacred texts (2010); and Women’s Work, a co-edited collection of writings by African-American women historians (2010). Currently she is working on a survey of Mormonism in American life that will be published by Basic Books. 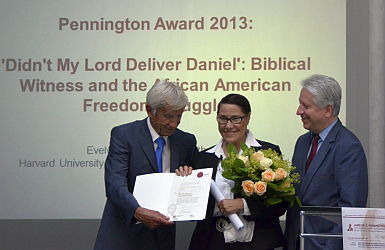 Albert J. Raboteau is one of the foremost authorities on African-American religious history in the United States. He is the Henry W. Putnam Professor of Religion at Princeton University and was the first recipient of the James W.C. Pennington Award, a prize given by the HCA and Heidelberg University's Faculty of Theology to scholars who have done distinguished work on the African American experience in the Atlantic world. Prof. Raboteau has written the seminal book on Christianity among American slaves, Slave Religion: The 'Invisible Institution' in the Antebellum South. He is also the author of A Fire in the Bones: Reflections on African-American Religious History and of Canaan Land: A Religious History of African Americans as well as co-editor of African-American Religion: Interpretive Essays in History and Culture. His current work is on religion and literature.